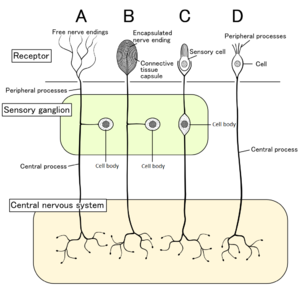 A sensory receptor, or sense organ, is the part which responds to a stimulus in the internal or external environment of an organism. It is the input to the sensory system.[1] In response to stimuli the sensory receptor fires off a nerve fibre which goes to the central nervous system.

Receptors are generally specialised for the detection of a specific type of stimulus.