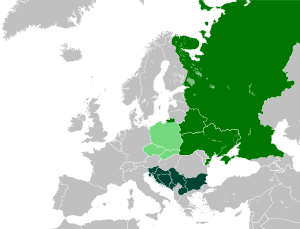 Slavs are the people who live in Eastern and Central Europe, the Balkans, Central Asia and North Asia . They include: Russians, Poles, Czechs, Serbs, Ukrainians, Belarusians, Bulgarians, Slovaks, Slovenes and Croats. Hungarians, Romanians, Lithuanians and Latvians live near the Slavic nations, but are not Slavs themselves. There are more Slavic peoples than any other ethnic group in Europe. Russians make up the most Slavs, followed by Poles and Ukrainians. Russians, Belarusians, and Ukrainians are East Slavic. Poles, Czechs, and Slovaks are West Slavic. Croatians, Macedonians, Slovenes, Serbians, and Bulgarians are South Slavic.

There are many small historic Slavic nations like Lusatia, Rusin, Kashubia and others. Russia is now the most powerful Slavic country, but in the 10th century the Czechs were more powerful, and in the 16th century Poland was the strongest nation in the area.