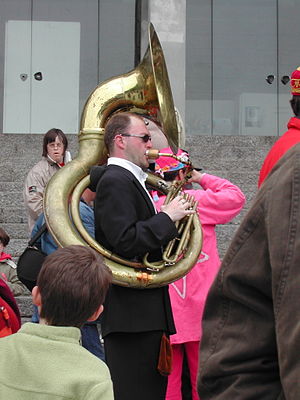 The sousaphone (U.S. /ˈsuːzəfoʊn/) is a brass instrument in the same family as the more widely known tuba. Created around 1893 by J.W. Pepper at the direction of American bandleader John Philip Sousa (after whom the instrument was then named), it was designed to be easier to play than the concert tuba while standing or marching. It should also carry the sound of the instrument above the heads of the band. Like the tuba, sound is produced by moving air past the lips, causing them to vibrate or "buzz" into a large cupped mouthpiece. Unlike the tuba, the instrument is bent in a circle to fit around the body of the musician; it ends in a large, flaring bell that is pointed forward, projecting the sound ahead of the player. Because of the ease of carrying and the direction of sound, it is widely employed in marching bands, as well as various other musical genres. Sousaphones were originally made out of brass but in the mid-20th century started to be made from lighter materials like fiberglass; today both types are in wide use.