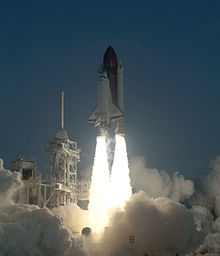 Space Shuttle Discovery taking off on the STS-41 mission

Space Shuttle Discovery (OV-103) is the third space shuttle run by NASA. It has flew more missions than any orbiter. It is named after RRS Discovery. It was retired on 9 March 2011. It has spent one year (365 days) in space. It is now on display at the National Air and Space Museum in Washington D.C.[1]