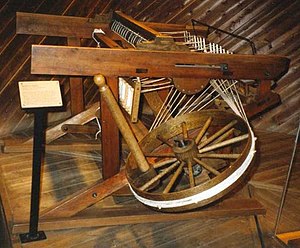 Model of the spinning jenny in a museum in Wuppertal, Germany

The spinning jenny is a multi-spool spinning wheel. It was invented around 1764 by James Hargreaves (c. 1720 – 22 April 1778) in Stanhill, near Blackburn, Lancashire in the northwest of England. The device dramatically reduced the amount of work needed to produce yarn. A single worker could work eight or more spools at once.[1]

The spinning jenny was a huge success due to the fact that it could hold more than one ball of yarn, therefore making more clothing materials in a shorter amount of time while reducing the overall cost.

Thomas Highs (1718–1803) also claimed patents on the spinning jenny, and on other machines for cloth production.[2]