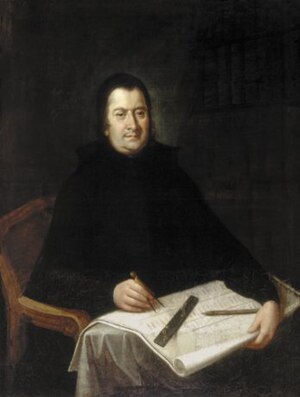 Stanislas Konarski (in Polish: Stanisław Konarski; his true name was Hieronim Franciszek Konarski), born 30th September 1700 in Żarczyce; died 3rd August 1773 in Warsaw (Poland), was a Polish teacher and writer. He made teaching better; he wrote political books, poems, and plays. He was a monk - member of the order of Piarists; he brought the Enlightenment in Poland.

Medal of 1765 with the likeness of Stanislas Konarski. There is written in Latin: Sapere auso
.

Between 1725 and 1727 Konarski learned at the Collegium Nazarenum in Rome, where he became a teacher of rhetoric - the art of good speaking. After that, in order to make better his own learning, he traveled through France, Germany and Austria. In 1730 he went back to Poland and began to work on a new text of Polish law ("Volumina legum").

From 1736 Konarski taught at the Collegium Resoviense in Rzeszów and in 1740 he started the Collegium Nobilium in Warsaw, a school for sons of the people of high social class ("szlachta"). Thereafter, he improved teaching of Piarists in Poland, in a way that agrees with his program of teaching (Ordinationes Visitationis Apostolicae..., 1755). His improvements became an important point in the fight of 18th century to make the system of Polish teaching more modern.

In the beginning, Konarski was joined politically with King Stanislas Leszczynski; later, he came near to Czartoryski's "Familia" and to King Stanislas August Poniatowski. He took part in the well-known "Thursday dinners". Stanislas August Poniatowski caused that a medal was made in the honor of Konarski, with his likeness. There was written in Latin: Sapere auso ("who was brave to be wise").