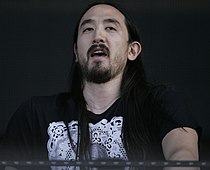 Aoki is known for his remixes of artists such as Kid Cudi. Aoki has released several Billboard-charting studio albums as well, such as Wonderland.