Granules of strontium in a glass tube 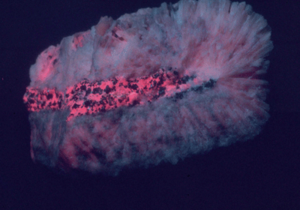 Strontium is a chemical element. It has the chemical symbol Sr. It has the atomic number 38. It is a metal. The colour of the metal is silver-white or yellow-silver. The metal is soft, and highly reactive chemically.

In chemistry it is placed in a group of metal elements named the alkaline earth metals. Strontium has a high chemical reactivity. The metal turns yellow when exposed to air. Strontium has properties similar to those of its two vertical neighbours in the periodic table, calcium and barium.

It is found naturally in the minerals celestite and strontianite. The 90Sr isotope is present in radioactive fallout and has a half-life of 28.9 years.

Strontium forms salts which make a red flame when they burn. They are used in flares for signalling the position of survivors or shipwrecks and to make the red colour in fireworks. It is named after the village of Strontian, Scotland.