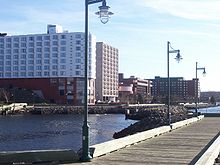 Sydney (2001 population: 24,115) is a Canadian community in the province of Nova Scotia. It is located on the east coast of Cape Breton Island and is part of the Cape Breton Regional Municipality.

Sydney was incorporated in 1904 and dissolved on August 1, 1995 when it was added into the regional municipality.