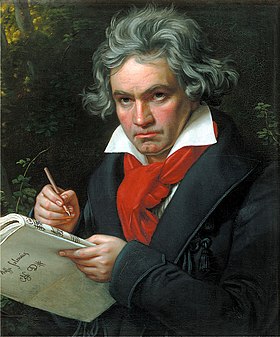 Ludwig van Beethoven was almost completely deaf when he wrote his ninth symphony.

Symphony No. 9 in D minor op 125 (Choral Symphony) by Ludwig van Beethoven is one of the most famous pieces of music ever written.

A symphony is a piece of music for orchestra. Beethoven wrote nine symphonies. This one, the last one he wrote, is very unusual because the last movement also has singing in it: there are four soloists (soprano, alto, tenor and bass) and a choir. This is why it is known as the “choral” symphony (“choral” means: “for choir”). It is a very long work, lasting more than an hour. This, too, was unusual.

This symphony has four movements. The first movement is in sonata form. The second and third movements come the other way round from the usual order: the second movement is the scherzo and the third movement is the slow movement. It is a theme and variations. The last movement sets the words of a poem by Friedrich Schiller, a famous poet who had only recently died. The poem was called Ode an die Freude (in English: Ode to Joy). The poem has a strong message to all mankind: it is about living in peace and harmony together. It was written at the time of the French Revolution when these ideas were becoming very important in Europe.

The main tune of the last movement (sung to the words: “Freude, schöne Götterfunken, Tochter aus Elysium”) is one of the best known tunes in the world. Many children like to play it on instruments because the first part of the tune only uses five notes (it can be played on C, D, E, F, G). When the tune comes the first time in the symphony it is played by the cellos and double basses.

The Ode to Joy was adopted as Europe's “National anthem” in 1972, with an official arrangement for orchestra written by Herbert von Karajan.

Beethoven had been interested in Schiller’s famous poem since he was young. In 1817 he started to write the first two movements of the symphony. In 1822 he decided to use Schiller’s poem in the symphony. Most of the rest of the symphony was written in 1823 and he finished it in 1824. It was first performed in May of that year. Beethoven conducted the performance. The story is told that he wondered why the audience were not applauding when it had finished. They were applauding, but Beethoven was deaf so he could not hear. Someone made him turn round, and he saw that people were applauding enthusiastically.