T.S.V. 1860 München is a football club which plays in the second German Bundesliga. 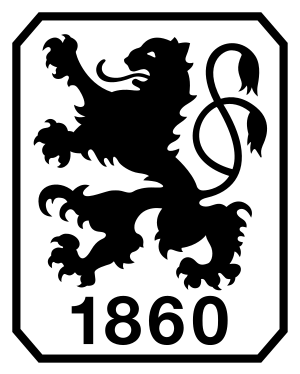 Official coat of arms
The club was founded in 1860, the football section was founded on 25 April 1899. The first match they played was 1902 versus 1. Münchner FC 1896. The match was lost 2:4. 1911 they built a football field on the Grünwalder Straße, where 1926 a stadium was built which offered 40 000 places. 1931 the team reached the final of the championship for the first time but was beaten by Herha BSC Berlin with 3:2. During the Nazirule in Germany 1860 München had close relations to the Nazi government.[1] In 1963 the club was one of the founders of the German Bundesliga. 1964 they won the German Cup and reached the final of the UEFA Cup winners cup but lost versus West Ham United. In the 1964/65 season they became for the first and last time German football champion. Till today they often played in the second league but sometimes in the Bundesliga.

Old stadium
TSV 1860 München plays in the Allianz Arena which they share with their rival Bayern München. If they play the skin of the Arena is blue. Originally they played at the Grünwalder Straße which they also shared with Bayern between 1925 and 1972.