Tamburello or pallatamburello is a traditional sport of Italy since 16th century. It has this name because they play with a roundish and oval tool named tamburello or tambourine in English language. Various forms of tamburello are popular in several nations of the world currently. 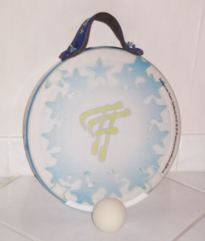 This form is also named classic and each team regularly has 5 players in open playing field 80 metres long and 20 large. Players use roundish tambourines during actions and they serve with oval tambourines. A rubber ball of 88 grams is used and the team which wins 13 games is final winner of the match: each game consists of 4 points. Professional Italian tamburello league is top level of competitions: in 2002 14 teams competed.[1]A variant is played in a kind of stadium, with lateral wall, named sferisterio or sferodromo in Italian language.[2]

Three players regularly form a side in indoor shorted courts.

Two players regularly form a side in courts divided by a net like tennis.

One or two players regularly form a side on beach courts divided by a net like beach tennis.