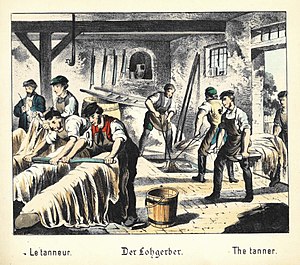 The tanner, illustration from 1880, from a book describing various professions 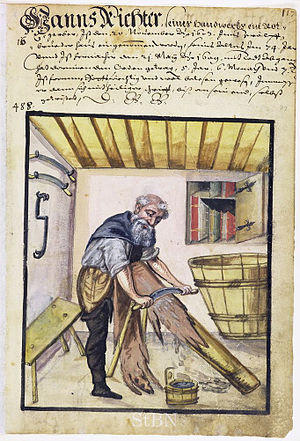 Illustration of tanning, from a book published in the 17th century

Before tanning an animal skin, the animal must be killed and skinned before the body heat of the animal leaves the animal's body.[1] Next, tissue on the inside of the skin and hairs on the outside are removed. Salt in the skin is removed and the skins are soaked in water ffor six hours to two days.

The actual process of tanning is done by soaking the leather in a bath of Chromium III sulphate ([Cr(H2O)6]2(SO4)3). In past centuries a natural substance called tannin was used, which was got from oak or fir trees.

The whole process is very smelly, and tanneries are often placed at the edges of towns. The runoff from tanning plants into rivers is a major cause of pollution. This can be prevented by methods of water treatment adapted to the outflow of tannery liquids. Developing countries may lack this methodology, even though World Bank grants are available for water treatment facilities. A private-sector trade association may give technical information about clean technologies.[2]

A tanner is someone whose job is tanning.

A tannery is the place where the tanners worked with the animal skins.