The Descent of Man

Title page of the first edition

The Descent of Man, and selection in relation to sex is a book by Charles Darwin, first published in 1871.

It was Darwin's second great book on evolutionary theory, with the first being his 1859 work, On the Origin of Species.

Darwin had said almost nothing about human beings in the Origin, except a single sentence:
"Light will be thrown on the origin of man and his history".

In The Descent of Man, Darwin applies evolutionary theory to human evolution, and also explains his theory of sexual selection. He thought the two topics were closely connected.

In the nearly 12 years between the Origin and the Descent of Man, several writers had written works on the subject. Noteworthy were: 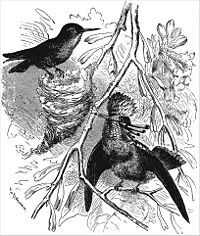 Illustration from The Descent of Man and Selection in Relation to Sex showing the Tufted Coquette Lophornis ornatus, female on left, ornamented male on right.

The starting point for sexual selection is the observation that males differ from females, not just in sexual apparatus, but in many other traits. This is true of many animals, and the question is why this happens. The answer given by Darwin, and followed by many other biologists, is that the selection on males is different from the selection on females.

Sexual selection is the theory proposed by Charles Darwin that states that certain evolutionary traits can be explained by intraspecific competition (competition between members of the same species).[1]

Darwin defined sexual selection as the effects of the "struggle between the individuals of one sex, generally the males, for the possession of the other sex".

Biologists today distinguish between "male to male combat" or "intrasexual selection" (it is usually males that fight each other), "mate choice" or "intersexual selection" (usually female choice of male mates) and sexual conflict.[2]

Secondary sex characteristics are features that distinguish the two sexes of a species, but are not directly part of the reproductive system. They are believed to be the product of sexual selection for traits which give an individual an advantage over its rivals in courtship and fighting.