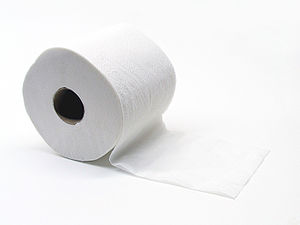 A roll of toilet paper.

Toilet paper is soft paper, used to wipe urine or feces after using the toilet. It is usually sold in rolls, made up of square sheets.

Modern toilet paper is very absorbent and is designed to break up in the sewage system. The paper is often available in different textures and colours.