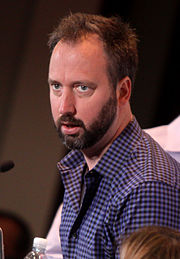 Michael Thomas "Tom" Green (born July 30, 1971)[1] is a Canadian actor, comedian, rapper, director, producer and writer. He was born in Pembroke, Ontario.[1] He had his own comedy program, The Tom Green Show, on MTV. He directed, co-wrote and starred in Freddy Got Fingered. He was also a member of the short lived hip hop group Organized Rhyme where he performed under the stage name "MC Bones".