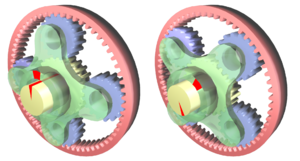 Not all transmissions are in cars. For example, bicycles have transmissions. You can see the gears, so it is easier to see how it works.