Signing of the Treaty of Ghent. Admiral of the Fleet James Gambier is shaking hands with the John Quincy Adams. Also, the British Undersecretary of State for War and the Colonies, Henry Goulburn, is carrying a red folder. 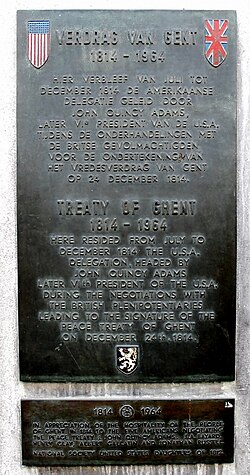 Plaquette at the building in the Veldstraat, Ghent. This where the American plenipotentiaries stayed and one of the locations where the treaty was negotiated. It was located at the retail "Esprit" store on Veldstraat 47.

The Treaty of Ghent was the peace treaty that ended the War of 1812 between the United States of America and the United Kingdom. It was signed on 24 December 1814 in the Flemish city of Ghent. The treaty restored the borders of the two countries to the line before the beginning of the war.[1]

The treaty was ratified by Parliament on 30 December 1814. It was signed into law by the Prince Regent (the future King George IV). An American army under Andrew Jackson scored a major victory at the Battle of New Orleans in early January 1815. The Treaty was not in effect until it was ratified by the U.S. Senate (unanimously) in February 1815.[1]