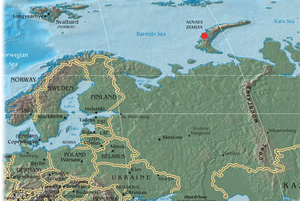 Tsar Bomba, the nickname for the AN602 H-bomb, was the largest, most powerful nuclear weapon ever used. It was originally tested by the Soviet Union on October 30, 1961. It was a three stage H-bomb.

This bomb is also called the Father of Bombs. See footage of the explosion here

The explosion had a power of 56.000.000 tonns of TNT (56 Megatonns). The Tsar Bomb was actually designed as a 100 Megaton-Bomb. But as there were problems to detonate a bomb as strong as 100,000,000 tonns of TNT, so the Soviet Union technicians reduced its power to 56 Megatonns.

The testing site of the nuclear bomb was Novaya Zemlya. There was not much fallout because the bomb was detonated at 8 miles height.

The bomb was dropped by a Soviet bomber, the Tupolev Tu-95. This was one of the only planes in the world which could carry the bomb. When the bomb exploded, the bomber fell one Kilometer in height from the huge blast wave.

Help Improve This Page: Please contact us to become an approved KidzSearch editor and provide your credentials. Provide feedback on this article in our Tsar Bomba Forum