Imperial Standard of the Tsesarevich
. 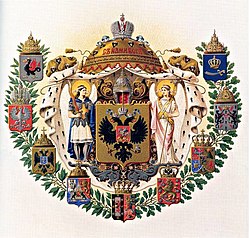 The title of Tsarevich of Russia[a] was traditionally used by the heir apparent or heir presumptive in the Russian Empire. The title was used with the style Imperial Highness. The title was usually only used by males due to females being prevented from succeeding the throne after Catherine the Great.

It is often confused with "tsarevich", which is the title for any son of a tsar.[1] Normally, there was only one tsesarevich at a time (an exception was Grand Duke Constantine Pavlovich, who was accorded the title until death, even though law gave it to his nephew), and the title was used exclusively in Russia.

The title came to be used together with the formal style "successor" (Naslednik), as in "His Imperial Highness the Successor Tsesarevich and Grand Duke". The wife of the Tsesarevich was the Tsesarevna.[2]

Help Improve This Page: Please contact us to become an approved KidzSearch editor and provide your credentials. Provide feedback on this article in our Tsarevich of Russia Forum