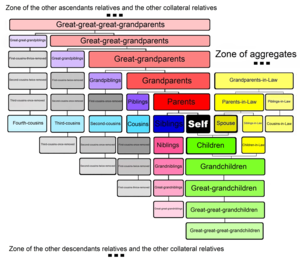 A chart showing the names for relationships in an extended family.

An uncle is a name used in an extended family. An uncle is either a brother of one of someone's parents. That person is the uncle's nephew (male) or niece (female). An uncle's child is a cousin.[1] A granduncle (also written as great-uncle or grand-uncle) is the brother of a grandparent.[1] In some cultures an uncle is considered a close family member. Based on the old Chinese saying "the oldest son in the family is the father of the family" an uncle is often the head of a family.[2] In many cultures no single word (such as uncle) describes both their parents' brothers. Instead there are words to describe a person's kinship to their mother's brother or a person's kinship to their father's brother. An uncle can also be someone not related by blood or marriage as in a term of endearment or respect. In this use uncle can also be part of a nickname such as Uncle Sam.

During the Middle Ages in western Europe, a maternal uncle played a particular role in the family. A young man was often closer to his maternal uncle (from Latin: avunculusScript error: No such module "Category handler". or "little grandfather") than to his own father.[3] Tacitus noted the Franks had very strong ties between a maternal uncle and his nephew.[4] In Roman family relationships the avunculus had a responsibility to defend his nephews as well as his nieces. The maternal uncle relationship was an extension of the Roman kin system's strong brother-sister relationship.[5]

A maternal or paternal relative is one who is related through their mother or father, respectively. For example a maternal uncle is a the subject's mother's brother.An in-law is a relationship that is not by blood, but instead by marriage. The in-law shares the in-law relationships of the spouses relatives. For example a uncle in-law could be the husband of the subject's Aunt.