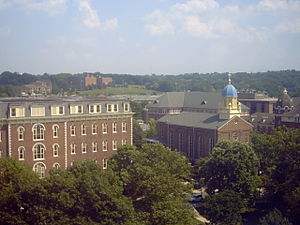 St. Mary's Hall and the Immaculate Conception Chapel which is on the campus

The University of Dayton is a private, Roman Catholic university in Dayton, Ohio. The university has about 10,569 students. It was founded in 1850. The current president of the university is Eric Spina.

The athletics teams of the university are called the Flyers. They have 16 varsity teams and they compete in the Atlantic 10 Conference and the Pioneer Football League for football.