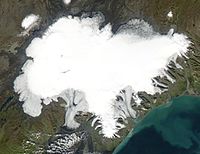 Grímsvötn in the Vatnajökull glacier

Vatnajökull (English: Glacier of Lakes) (IPA: [ˈvahtnaˌjœːkʏtl ̥]) is the largest glacier in Iceland. It lies in the south-east of the island, covering more than 8% of the country.

The average thickness of the ice is 400 m, with a maximum thickness of 1,000 m. Iceland's highest peak, Hvannadalshnúkur (2,110 m), is located at the southern tip of Vatnajökull, near Skaftafell National Park. It is classified as an ice cap glacier.

Vatnajökull has been shrinking for some years now, possibly because of climatic changes and recent volcanic activity. Until 1930 it was growing.

According to Guinness World Records Vatnajökull is the object of the world's longest sight line, 550 km from Slættaratindur, the highest mountain in the Faroe Islands. GWR state that "owing to the light bending effects of atmospheric refraction, Vatnajökull (2119m), Iceland, can sometimes be seen from the Faroe Islands, 340 miles (550 km) away". This may be based on a claimed sighting by a British sailor in 1939. The validity of this record is analysed/undermined in mathematical and atmospheric detail by J.C. de Ferranti