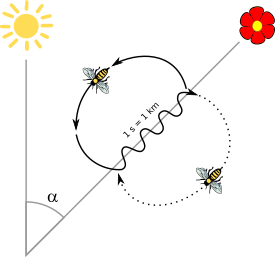 The waggle dance - the angle from the sun shows direction; the duration of the waggle part of the dance shows the distance.

The waggle dance is a special 'figure-of-eight' dance that is done by the honey bee in its hive. By this, a worker tells the others where it has found nectar. This was shown by the Austrian ethologist Karl von Frisch.

The dance is a type of communication for bees. It is done to give other bees information about the direction and distance to flowers that have nectar or pollen, or both. It is also used to tell the bees where water can be found.

The dance is used for bees to get others to help them collect resources for the hive. It used to be thought that bees have two distinct "recruitment" dances. There were the "round dances" and waggle dances. Round dances were thought to be used for things that were close by and wiggle dances were for things farther away. It is now known that a round dance is only a waggle dance with a very short "waggle run" (see below).

A waggle dance is made up of one to 100 or more circuits. Each circuit has two phases. These phases are the waggle phase and the return phase. When a bee returns to the hive after finding a good food source, it performs the dance. The bee will run through a small wave-like pattern (a waggle run or waggle phase). After this, it will turn to the right and circle back to the starting point (the return phase). It will then do another waggle run and then turn to the left and circle back to the beginning. The waggle phase of the dance is the most notable and informative part of the dance.

People study the swarm intelligence of social insects and animals such as fish, birds, and ants. Recently, there has been research on using bee waggle dance behavior for fault-tolerant routing.[1] From the abstract of Wedde, Farooq, and Zhang (2004)[2]

Another technique based on bees is called bee colony optimization. It is used help Internet servers communicate better.[3][4]