Wakeboarding is a water sport that involves riding a wakeboard over the surface of a body of water. The rider is usually towed behind a motorboat. This sport, that appeared in the beginning of the eighties, has been inspired by surfing, water skiing and snowboarding. 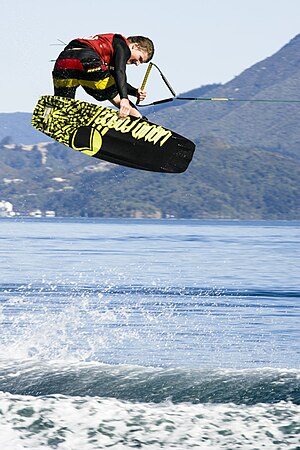 To practice wakeboarding, a boat, a rope and a board are necessary. If the rider wants to do bigger jumps or tricks, he needs a tower. The waves created by the boat act like a ski jump for the surfer.[1]

In 1985, Tonny Finn, a surfer, marketed the "Skurfer". It was a board inspired by surfing and water skiing. The "Skurfer" was thick and it had an aileron at his back. [2]

In 1987, the "Skurfer" board was introduced in France by Maurice Lejeune.

In 1990, the first official competition was taking place in Orlando, Florida, United States, while the first wakeboard was marketing.

In 1993, the first world wakeboard championship was organised in United States by the WWA.

In 1995, it was the apparition of the "twin tips". The principle of this board has still used today. The "twin tips" has one or more ailerons in its back and its front.

In 2001, wakeboarding became a discipline in the Akita’s World Games of Japan.[3]

In 2004, the first magazine dedicated to the wakeboard, Unleashed Wakeboard Magazine, was published in France.