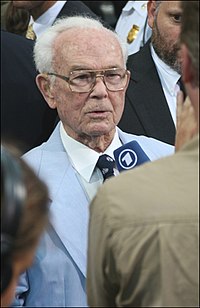 Colonel Walter Rudolph Walsh (May 4, 1907 – April 29, 2014) was an American FBI agent, United States Marine Corps shooting teacher and Olympic shooter. Walsh joined the FBI in 1934. He was there during the public enemy era. He was known for capturing Arthur Barker and for killing Al Brady.[1]

Walsh was the oldest retired FBI agent. He competed as a shooter at the 1948 Summer Olympics. He was the oldest surviving Olympic competitor until his death in 2014.[2]

Walsh received awards for his marksmanship. He was the coach of the Olympic shooting team until 2000. At age 100, he was present at a re-enactment of the Al Brady shootout in Bangor, Maine.[3] At this event, he was presented with a plaque and the key to the city.[4]

Walsh was born in Union City, New Jersey.[5] He studied at Rutgers Law School. He joined the National Guard in 1928.

Walsh had three daughters and two sons. His wife died before him. He died in his home in Virginia from natural causes. His death was less than a week before his 107th birthday.[6]