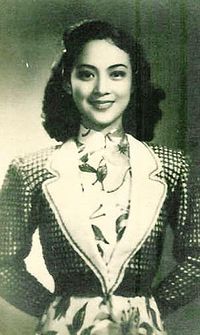 She named as one of the four greatest actresses in Hong Kong, officially recognized as a "movie star of New China" in 1962, and received two Lifetime Achievement Awards. She starred in more than 60 movies.[1][2]

She retired in 1980. Wang was invited to attend President Ronald Reagan's second inauguration in 1985.[3]

This short article about an actor or group of actors can be made longer.

Help Improve This Page: Please contact us to become an approved KidzSearch editor and provide your credentials. Provide feedback on this article in our Wang Danfeng Forum