Wood grain describes the , and appearance of the wood . This is often important in its effect on woodworking techniques (e.g. against the grain).

In describing the alignment of the wood in the tree a distinction may be made. Basic grain descriptions and types include:

Maple burl, not to be confused with bird's eye maple

In addition, there are a few special grain alignments. Their rarity often promotes the value of both the raw material, and the finished work it becomes a part of. These include:

In describing the application of a woodworking technique to a given piece of wood, the direction of the technique might be: 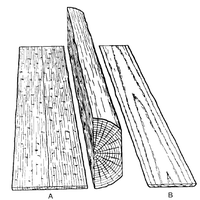 In a wider sense, the term grain may also be applied to the orientation of the cut, the way a given piece of wood has been sawn: