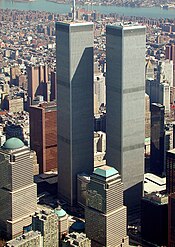 The Twin Towers on the New York City skyline 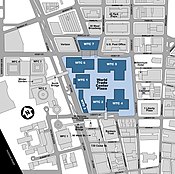 The original World Trade Center was designed by Minoru Yamasaki in the early 1960s using a tube-frame structural design for the twin 110-story towers. In gaining approval for the project, the Port Authority of New York and New Jersey agreed to take over the Hudson & Manhattan Railroad which became the Port Authority Trans-Hudson (PATH). Groundbreaking for the World Trade Center took place on August 5, 1966. The North Tower (1) was completed in December 1970 and the South Tower (2) was finished in July 1971. Construction of the World Trade Center involved excavating a large amount of material which was used in making Battery Park City on the west side of Lower Manhattan.