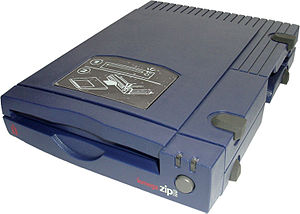 The Zip drive is a data storage device. The company Omega published it in late 1994.