The Zulu are the largest ethnic group in South Africa. There are 10-11 million Zulu living in South Africa, mostly in KwaZulu-Natal province. However, a small number of Zulu also live in Zimbabwe, Zambia, and Mozambique. The Zulu language, called isiZulu, is a Bantu language of the Nguni subgroup.

The Zulu were originally a major clan in the area that is today Northern KwaZulu-Natal. The Zulu clan was started around the year 1709 by Zulu kaNtombhela. In the Nguni languages, the words iZulu, iliZulu, and liTulu mean heaven, or sky.[3]

In the early 1700s, many large Nguni communities and clans lived in the area. These groups were called isizwe (nations) and isibongo (clans). These Nguni communities had migrated down the East coast of Africa over thousands of years. These movements of people were called the Bantu migrations. They probably arrived in what is today South Africa in the 800s. 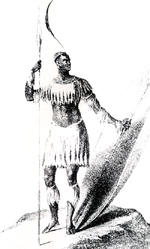 Shaka, king of the Zulu. An engraving based on a sketch by Lt. James King, a merchant in Port Natal.