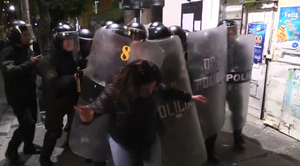 Violence is when someone attacks someone else, often to get them to do something they do not want to do by making them feel pain or fear. Violence can mean anything from one person hitting another to a war between many countries that causes millions of deaths. Different people may see different acts as violent. Laws are created often to control violence.