Convicts, Lunatics, and women have no vote in Parliament. This poster was made in 1908 and was used to support the rights of women. Even though this poster was made to campaign to let women vote in elections, it also shows ableism towards mentally ill people.

Ableism or ablecentrism is prejudice towards disabled people. The first known use of the word was in 1981, which makes it relatively new. However, the concept of ableism existed before this. 'Disablism' can be used to mean the same thing. Ableism can be intentional or unintentional. People can be ableist (prejudiced towards disabled people) unintentionally because ableism is so common that people may not notice that it exists. A person who holds such a prejudice is called an ablecentrist.[1] Some people say that ableism is a form of oppression. Not everyone who talks about ableism agrees about what things are ableist. Disabled people can be ableist, to other disabled people or to themselves, which is called internalized ableism. Some people deny that ableism exists.

In some countries, there are laws that are made to protect disabled people from ableist discrimination and Convention on the Rights of Persons with Disabilities also prohibits such discriminations.

Ableism takes many forms around the world. Sometimes ableism is done in a way that is supposed to be hurtful. Other times people are ableist while they are trying to be nice. Both of these types of ableism are harmful.

Society is not built for disabled people. For example, there are lots of shops that are not accessible for people who use wheelchairs because the person who made the shop was able-bodied so they didn't consider that people in wheelchairs wouldn't be able to move around comfortably, or they thought of this but didn't care.

A common way that disabled people are abused is 'disability bullying'. People think of bullying as something that just happens to children at school that is not serious. This is not true. Bullying happens to people of all ages. Bullying causes long-term psychological problems such as low self-esteem. Some people kill themselves because they have been bullied. Mencap, a charity that helps people with intellectual disability, asked over 500 disabled children and young people about bullying in a survey. 8 out of 10 children with a learning disability said that they are bullied and are scared to go out because they are scared they will be bullied.[2]

The English language has been criticised for being ableist. For example, young people sometimes say that something is 'retarded' when they mean that it is bad. This can be offensive to disabled people.

In World War Two, many thousands of disabled people were murdered by Nazis. The Nazis did this because they believed in non-voluntary euthanasia and forced eugenics, which is a philosophy that advocates reproduction by humans with 'desirable' traits and discourages reproduction by humans with 'undesirable' traits. They thought that disability is bad and disabled people are a burden on society. Many people still believe those things. In 2013 a councillor in Cornwall called Colin Brewer said that disabled children 'should be put down' to save money. He was found guilty of misconduct but the council could not fire him.[5]

Disabled people are sometimes forcibly sterilized. This is often illegal because reproduction is considered a human right. According to The Telegraph, people in the UK are trying to change a government law that makes it legal to have an abortion up to 40 weeks in a pregnancy if the fetus is disabled.[6]

In 2011, a book called Scapegoat: Why we are failing disabled people was published. The book was written by Katharine Quarmby. It is about hate crimes towards disabled people in the United Kingdom. 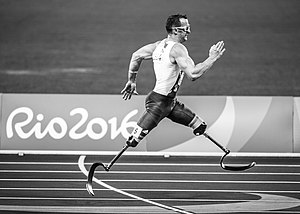 A runner in the Rio 2016 Paralympic Games

Sports are often an area of society in which ableism is evident. In sports media, athletes with disabilities are often portrayed to be inferior.[7] When athletes with disabilities are discussed in the media, there is often an emphasis on rehabilitation and the road to recovery, which is inherently a negative view on the disability.[8] Oscar Pistorius is a South African runner who competed in the 2004, 2008, and 2012 Paralympics and the 2012 Olympic games. Pistorius was the first double amputee athlete to compete in the Olympic games.[9] While media coverage focused on inspiration and competition during his time in the Paralympic games, it shifted to questioning whether his prosthetic legs gave him an advantage while competing in the Olympic games.[10][11]