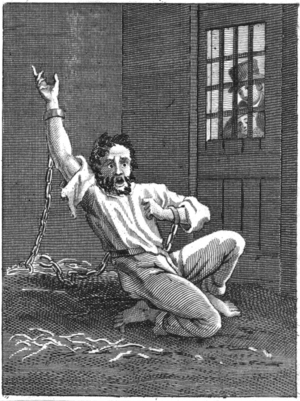 Lunatic is an old term that was used to refer to a person with a mental illness, or a mental disability. The term goes back to the Latin word lunaticus, which means ' of the moon', or moonstruck. It was also used in English law until about 1930, when it was replaced by "person of unsound mind". Starting 1959, English law speaks about "mental illness". 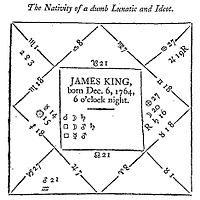 The horoscope of a "Lunatic" according to an astrologer who describes how the positions of the planets Saturn and Mars with respect to the moon are the cause of "diseases of the mind".[1]

The term "lunatic" was originally used to refer mainly to epilepsy and madness, as diseases thought to be caused by the moon.[2][3][4] The King James Version of the Bible records "lunatick" in the Gospel of Matthew which has been interpreted as a reference to epilepsy.[2] By the fourth and fifth centuries, astrologers were commonly using the term to refer to neurological and psychiatric diseases.[2][5]Philosophers such as Aristotle and Pliny the Elder argued that the full moon induced insane individuals with bipolar disorder by providing light during nights which would otherwise have been dark, and affecting susceptible individuals through the well-known route of sleep deprivation.[6] Until at least 1700, it was also a common belief that the moon influenced fevers, rheumatism, episodes of epilepsy and other diseases.[7]