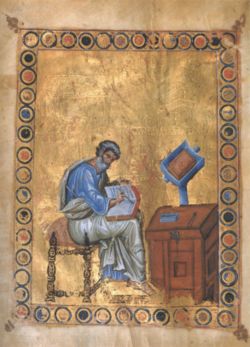 St Matthew writing his gospel. Picture from a Medieval Bible.

It is not thought to have been written by the apostle Matthew, who was one of Jesus' twelve apostles (see below). The Gospel of Matthew is called one of the synoptic gospels because it has some of the same stories and language as the Gospels of Mark and Luke.

Matthew wrote the gospel mainly for the Jewish people, to show them that Jesus is really the Messiah. Like the Gospels of Mark and Luke, Matthew tells many stories about Jesus' life. Matthew's gospel also talks about Jewish scripture.

Early Christian tradition attributes the gospel to the apostle Matthew. This is now rejected by modern scholars.[1][2]