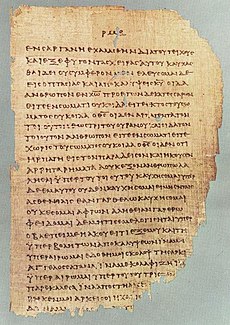 A page of P46, one of the oldest surviving New Testament manuscripts in Greek. Its probable date is 175–225 AD.[1]

Each of the Gospels tells the story of Jesus Christ, or the young Messiah, who Christians believe is the "Son of God who is born to save the world from sin". Each of the Gospels tell this same story, with a little more or less detail from the other. The other books tell about the history of the church and explain the Christian faith through letters written to persons and groups that have believed in Jesus

The traditional author is listed after each entry.

Acts of the Apostles

Pauline epistles, the 13 or 14 letters believed to be written by Saint Paul the Apostle. They are named for the person or group to which they were sent.

General epistles are other letters which are named for the person traditionally believed to have written them.