This is one of the oldest English translations of the Gospels, and was made in the 1300s. It was translated by John Wycliffe. John's Gospel starts where the large letter "I" is. It reads "In þe bigynnyng was/þe word & þe word/was at god/& god was/þe word." 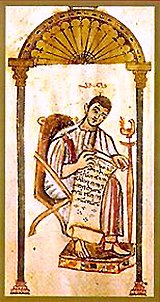 A Syriac Christian rendition of St. John the Evangelist, from the Rabbula Gospels.

In the gospel, it is says that the book was written by "the disciple whom Jesus loved". [1] It is believed that John the Apostle, the son of Zebedee, wrote the gospel. He was probably the youngest of the Twelve Apostles of Jesus. John lived a long life and was imprisoned on the Island of Patmos in his old age. He also wrote the last book of the New Testament, called the "Book of Revelation".

The Gospel of John tells many of the stories of Jesus' life that are in the other three gospels, but also contains a lot of different information. The Gospel begins by calling Jesus "the Word" (the Communication of God). It says "In the beginning was the Word, and the Word was with God and the Word was God." In John's Gospel, the writer shows that Jesus was part of God, who came to live among humanity so that they could "hear His voice" and have the power to become true "children of God".

According to the gospel, the accounts are written so that the reader "may believe that Jesus is the Messiah, the Son of God, and that by believing you may have life in His name". (TNIV; John 20:31)

The book follows a pattern. There are seven "signs" leading up to the raising from the dead of Lazarus (this anticipates the resurrection of Jesus), and seven "I am" sayings and discussions, leading up to Thomas saying that the risen Jesus is "my Lord and my God" [2]

The phrase "born again" comes from the third chapter, and was the title of a book by Chuck Colson who was a lawyer for President Nixon but after being in jail became a prison reformer. The phrase was used later for any person who had a dramatic change in their life.

Chapter 3, verse 16 is perhaps the best known verse in the entire New Testament. "For God loved the world so much that He gave his only son (Jesus), so that whoever believed in Him, would not die but live forever". This verse was searched on the internet by millions of people after Tim Tebow, an American football player wrote "Jn 3:16" on his face in an important football game.