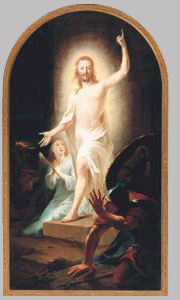 In the New Testament, Jesus is crucified, dies, is buried within a tomb, and resurrected (came back to life) three days later. Christians celebrate the resurrection at Easter. Easter and Christmas are the most important Christian holidays.

Christians believe that Jesus is the son of God. They believe that the best proof of this is that he came back to life after his death. In Christian theology, the death, resurrection, and return to heaven of Jesus are the most important events of the Christian faith.[1][2] The Nicene Creed states: "On the third day he rose again in accordance with the Scriptures".[3] According to Terry Miethe, a Christian philosopher at Oxford University, the question " 'Did Jesus rise from the dead?' is the most important question regarding the claims of the Christian faith."[4] According to John R. Rice, a Baptist evangelist, the resurrection of Jesus was part of God's plan for forgiving people by paying the penalty for man's sin.[5] The Catholic church teaches:

Although the Resurrection was an historical event that could be verified by the sign of the empty tomb and by the reality of the apostles' encounters with the risen Christ, still it remains at the very heart of the mystery of faith as something that transcends and surpasses history.[6]

All of these New Testament writers tell about the resurrection.