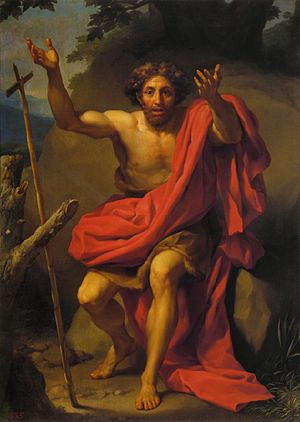 A painting of John the Baptist

John the Baptist (also called John the Baptizer or Yahya the Baptizer) is viewed as a prophet by at least three religions: Christianity, Islam, and Mandaeanism. According to the New Testament, he was a preacher who baptized people.

John called people to turn to God and to prepare for the coming of the messiah (Jesus). He baptized Jesus in the Jordan River.[1] People would go to him so that he would put them in the water to show that they have turned away from their sins, so that they could get into heaven.

John was the son of Zechariah and Elizabeth, and a relative of Jesus.[2] He was known for living in the wild, wearing clothes made from camel's hair,[3] and eating locusts and honey.[4][5] In Catholicism, his birthday is celebrated on June 24.