Baptism is a rite or ceremony performed by most Christian churches and denominations. It is done as a cleansing symbol. It shows that the person being baptized has become a follower of Jesus. it can represent the joining of the Christian family

Roman Catholicism baptize infants to mark their becoming members of the church.[1] It is a sacrament usually performed by a priest. In most other churches, it is when the person is old enough to decide that they are ready.

Some religious groups practice baptism by sprinkling a small amount of water on the person, usually their head. Other groups use full immersion, dipping the whole person in the water. 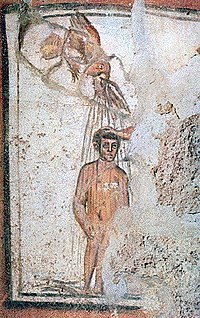 Baptism in early Christian art. This is a fresco in the catacombs of Rome.

In the Old Testament, a similar washing ceremony was done when priests were ordained.[2] Jesus was baptized by John the Baptist before he began his ministry.[3] The usual form of baptism among the earliest Christians was for the person to be immersed totally or partially. But sprinkling, or pouring, was also practiced at an early day with sick and dying persons when total or partial immersion was not practical.[4]