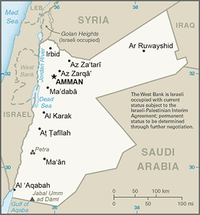 A map of Jordan

Jordan is a country in the Middle East. Its official name is The Hashemite Kingdom of Jordan.

Jordan has borders with the countries of Saudi Arabia, Israel, Syria and Iraq. It also has a very short coast on the Red Sea, and a longer coast along the Dead Sea.

Most of Jordan is desert and the country is very dry. The northwest of Jordan is its highest part, and its lowest part is the Dead Sea. This is the lowest place on the Earth that is open to the sky.

The capital of Jordan is Amman.

People from Jordan are called Jordanians. Most of them speak Arabic as their first language. The population of Jordan is about 10.5 million people.

Jordan is a constitutional monarchy and has a king. The King is the head of state, but he does not have all the power in the country. King Abdullah II has been the King of Jordan since February 1999. Most Jordanians are Muslim. There are around 200-400,000 Christians.

Jordan's national meal is mansaf. The most popular sport is football.

Unlike some of the countries around it, Jordan has little petroleum and natural gas. Some of its economy comes from mining instead. Jordan is the largest producer of the mineral phosphate in the world.[6] Jordan is a Member of the OECD since 2019 as the first Arab Country to do so.

The currency of Jordan is called the Jordanian dinar.