KidzSearch Safe Wikipedia for Kids.
Jump to: navigation, search
This page is about the modern state of Syria. For other uses, see Syria (disambiguation). 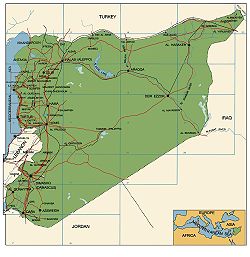 The current president and head of state is Bashar al-Assad. Syria's national capital is Damascus. The biggest city is Aleppo. The Syrian civil war began in 2011.

Syria has a very long history. It was a land of Phoenicians. Later it became part of the Achaemenid Empire, Roman Empire, and then the Eastern Roman Empire. In those days people spoke the Syriac language. The city Antioch was great and one of the important cities in Christendom. The Umayyad Caliphate took control of Syria in the 7th century. In this Arab Empire people began to speak the Arabic language. Today most Syrian people believe in Islam but there are still Christians too.

When World War I started, the Ottoman Empire ruled Syria and many other places. When it ended, France controlled Lebanon and Syria. Britain had Iraq, Jordan and Palestine. They drew a border between Iraq and Syria in 1920. France controlled Syria until 1946 when Syria became its own country.[9]

In 2012 with the Arab Spring a bloody civil war began against President Bashar al-Assad.

It is also known as Western Kurdistan.

Syria is a republic. The old Constitution of Syria was started on 13 March 1971.[10] It made Syria as a secular socialist state. Islam was the majority religion. A new constitution has been in place since 2012.

The executive branch is the president, two vice presidents, the prime minister, and the Council of Ministers. The constitution says the president must be a Muslim.[10] It does not make Islam the state religion. According to the 2012 constitution, the president is elected by Syrian people in a direct election.

Nearly all of Syria’s radio and television outlets are state owned. The Ba'ath Party controls nearly all newspapers.[11]

Syria's human rights are among the worst in the world, according to human rights organizations such as Human Rights Watch.[12] The authorities arrest democracy and human rights activists, censor websites, detain bloggers, and have travel bans.

The President of Syria is commander in chief of the Syrian armed forces. There are about 400,000 troops. Ethnic Kurds have their own army called YPG. The Males must go in the military when they are age 18.[13]

Syria has three international airports (Damascus, Aleppo and Lattakia). They are hubs for Syrian Air. Foreign airlines also fly to them.[14] Most Syrian cargo is carried by Chemins de Fer Syriens, the Syrian railway company.