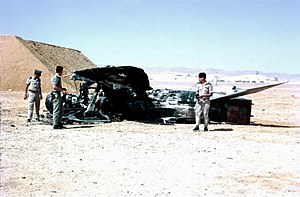 The Six-Day War was a war that started on June 5, 1967 and ended June 10, 1967. The fight was between Israel and Egypt, Jordan, and Syria, but many other countries helped out the different sides.

The war began when Egypt planned to capture Israel, which was seen by the Arab world as an illegitimate state. Egypt also wanted to liberate the Palestinian state. The war also began because of fear of an attack from Israel as suggested by soviet intelligence and from internal pressure within Egypt. Egypt, Syria and Jordan gathered troops and prepared for battle, while Arab authorities made clear their intentions for the destruction of Israel. Israel began the mounting precautionary troops against their borders with Syria, Egypt and Jordan as their prime reason.

The Israeli air raids were described as a preemptive, or first, strike against the Egyptians. This attack was against the Egyptian airfields. The Egyptians had 50 runways and about 960 attack aircraft, while the Israelis had 300 attack craft. Israel attacked while Egypt's planes were still on the ground. In three hours nearly the entire Egyptian air force was wiped out. This surprised the Egyptians, and Israel went on to attack on the ground. Israel was then attacked by Syria and Jordan and defeated them both.

The entire war took only six days from beginning to end, which is how it got its name. As a result Israel claimed lands that had great strategical and historical importance for Israel. Eventually Israel returned the Sinai Peninsula to Egypt, but kept the lands acquired from Jordan under military control and started building settlements. The UN requested Israel to retreat to the pre-1967 borders and to help form an Arab-Palestinian state. Negotiations have been taken place over the Palestinian state in Gaza and the West Bank. Fighting continues to stall peace talks in the region.