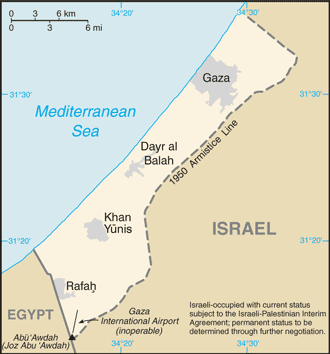 Map of the Gaza Strip from The World Factbook.

The Gaza Strip is a Palestinian stretch of land along the Mediterranean. The main city in the Gaza Strip is called Gaza. At the beginning of 2006, the strip is not part of any recognized country. It is currently ruled by Hamas.

It is one of the most densely populated areas on Earth. About 1.5 million people live on a surface of roughly 493 km².

Israel withdrew from Gaza in 2005, and gave over the territory to Palestinian administration. Meanwhile, Hamas, the Palestinian group which controls the territory, has launched rockets at Israel. Israel has fought back and bombed Gaza, most recently during December of 2008.

Most inhabitants are related to the Arabs displaced from their homes during the Israel War of Independence in 1948. They live in cities which they call refugee camps. The main problems facing the area are war, unemployment, poverty and malnutrition. In 2010 a large shopping mall opened in Gaza.