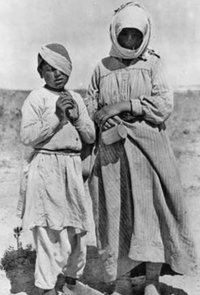 An Armenian refugee woman with her son. (Armenian Genocide)

A refugee camp in Chad, linked to the Darfur conflict

In 1951, the United Nations (UN) law called Convention Relating to the Status of Refugees, said a refugee was a person who is forced to leave their country due to natural disasters or war and conflict

owing to a well-founded fear of being persecuted for reasons of race, religion, nationality, membership of a particular social group, or political opinion, is outside the country of their nationality, and is unable to or, owing to such fear, is unwilling to avail him/herself of the protection of that country.[1]

In 1967 the Conventions’ 1967 protocol and by regional conventions in Africa and Latin America to include persons who had fled war and violence in their country. A person who is seeking to be recognized as a refugee is an asylum seeker. In the United States a recognized asylum seeker is known as an asylee.[2]

A refugee is a person who has to leave his or her country. This can be because of different reasons: