Lua error in package.lua at line 80: module 'Module:WPMILHIST Infobox style' not found. The Darfur conflict is an ongoing military conflict in the Darfur region of Sudan, the third largest country in Africa. It is a conflict along ethnic and tribal lines that began in 2003. Many people and the United States Government, consider it to be a genocide.[1][2] The United Nations currently does not see this as genocide.[3][4][5]

Those involved in the conflict

One side of the conflict is composed mainly of the Janjaweed, a militia group recruited from the Arab tribes who move from place to place herding camels. The Sudanese government tells the public that it does not support the Janjaweed. However, it has provided cash and assistance and has even participated in joint attacks.[6]

The other side of the conflict is made up of a number of rebel armies, including the Sudan Liberation Movement and the Justice and Equality Movement. These armies are recruited from Black ethnic groups who make a living farming the land.

How the conflict is dealt with 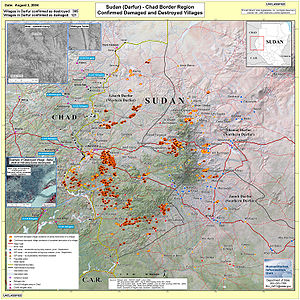 Villages destroyed in the Darfur region of Sudan, 2004
The African Union sent a 7,000-troop peacekeeping force to Sudan. However, this force was poorly funded and under-equipped. So the United Nations decided to send an additional 17,300-troop peacekeeping force to help them. Sudan was strongly against this decision and saw the UN forces as foreign invaders. The next day, the Sudanese military launched a major offensive in the region.

The Sudanese government may have suppressed information about the conflict. Some witnesses have been jailed, others may have been killed. This started in 2004. Also, some evidence, such as mass graves was tampered with, so that it became unusable. Some people say this was done by forces which are close to the Sudanese government.[7][8][9] In addition, by obstructing and arresting journalists, the Sudanese government has been able to obscure much of what has gone on.[10][11][12][13] The United States government has described it as genocide,.[2] The UN has declined to do so. In March 2007 the UN mission accused Sudan's government of "gross violations" in Darfur and called for urgent international action to protect civilians there.[14]

Effect of the conflict

There are different estimates of how many died in the conflict. According to Sudan's government, 9,000 people have been killed. On the other hand, many other people say that it could be from 200,000 to over 400,000. By October 2006, as many as 2.5 million people had to move because of the conflict.[15]

The United Nations says that about 200,000 people have been killed in the conflict so far.[16] Most non-governmental organizations use 200,000 to more than 400,000. The latter is a figure from the Coalition for International Justice that has since been cited by the UN. Sudan's government claims that more than 9,000 people have been killed, although this figure is seen as a gross underestimate.[17][18]