Chad (French: Tchad; Arabic: تشاد, officially called the Republic of Chad), is a landlocked country in Central Africa. The capital is N'Djamena.

Arabic and French are the official languages. Islam and Christianity are the most widely practiced religions.

Chad has one of the highest levels of hunger in the world. Food insecurity is common in the country. 80% live in total poverty on less than a dollar a day, and 90% are unemployed in Chad. Chad has a low life expectancy. Life expectancy is 54 years old in Chad.

Chad is home to 134 kinds of mammals, 141 bird species, 52 kinds of reptiles, 30 amphibians and 130 kinds of fish. Many animals such as elephants, hippopotamuses, rhinoceroses, warthogs, giraffes, antelopes, lions, leopards, and cheetahs live in Chad. 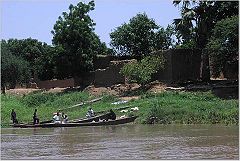 Chad is the world's 21st-largest country. It is slightly smaller than Peru and slightly larger than South Africa.[5][6] To the north is Libya, to the south is the Central African Republic, to the east is Sudan, and to the west are Cameroon, Nigeria, and Niger.

The country's capital is 1,060 kilometres (660 mi) from the nearest seaport Douala, Cameroon.[7][8] Due to this distance from the sea and the country's largely desert climate, Chad is sometimes called the "Dead Heart of Africa".[9]

The region's tall grasses and large amount of marshes make it good for birds, reptiles, and large mammals. Chad's major rivers are the Chari and Logone.

Since 2002, the Republic of Chad has been divided into regions. It was previously divided into prefectures, and then departments.

The largest cities in Chad are:

Chad's official languages are Arabic and French, but over 100 languages and dialects are spoken. Due to the important role of Arab traders and merchants, Chadian Arabic has become a lingua franca, a language for all to use.

Attending primary school is required in Chad, though only about 50% of children attend school.[10] Adult literacy is only 35%.[10]