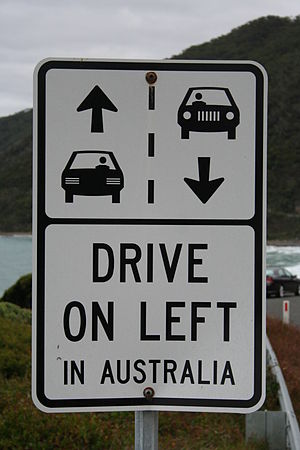 Historically, before the creation of the automobile, people mostly rode on the left-hand side, since most people were right-handed and would whip their horses with their left hands. Warriors in battle could also use their right hand to hold and control their weapon.[4] However, during the 1700s, many farmers began to pull their vehicles using teams of horses rather than just one. This was so that the driver could easily whip all the horses and so that the driver could see how close their wheels were to colliding to another wagon. In 1794, France passed the first right-hand driving laws, and this law would spread with Napolean's conquests.[5] The territories and regions of the former Austro-Hungarian and Portuguese Empires refused to change the direction of driving at first, but most eventually chose to drive on the right-side. Only Mozambique, East Timor, and Macau (all former Portuguese colonies) still drive on the left-side.[6] Canada, Myanmar, Gibraltar, British Indian Ocean Territory, and a few countries in West Africa like Ghana, Nigeria, Sierra Leone, and the Gambia all switched to driving on the right hand side of the road.