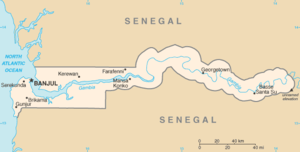 A map of The Gambia

The Gambia is officially called the Republic of the Gambia. This country is also known as Gambia.[5] It is a country in West Africa. It is surrounded by Senegal. It is the smallest country on mainland Africa.

Banjul is the capital city.[6] The largest cities are Serekunda and Brikama.[7]

The geography of Gambia is unusual. It is a long, thin country. Except for its coastline it is completely surrounded by the country of Senegal. The River Gambia flows from Senegal through its centre and into the Atlantic Ocean.

The Gambia has a tropical climate. A hot and rainy season normally lasts from June until November.[8]

The Gambia gained independence from the United Kingdom on 18 February 1965. It was ruled by Dawda Jawara and his People's Progressive Party (PPP) from 1965 to 1994. There was a military take-over in 1994. In 1996, Yahya Jammeh became President. Then in 2016, Adama Barrow was elected.

The Gambia is divided into eight local government areas. They are:

The population of The Gambia is about 1.7 million. People from The Gambia are called Gambians. A number of people from different cultures and backgrounds live in The Gambia. Some of the largest groups are called Mandinka, Fula, Wolof and Jolo, in that order.

English is the official language, but people speak other languages as well.

The American writer Alex Haley, who wrote the book Roots, found that his family came from The Gambia in the 1760s.