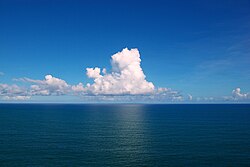 The Atlantic Ocean has important ocean currents. One of these, called the Gulf Stream, flows across the North Atlantic.[5] Water gets heated by the sun in the Caribbean Sea and then moves northwest toward the North Pole. This makes France, the British Isles, Iceland, and Norway in Europe much warmer in winter than Newfoundland and Nova Scotia in Canada.[5] Without the Gulf Stream, the climates of northeast Canada and northwest Europe might be the same, because these places are about the same distance from the North Pole.[5]